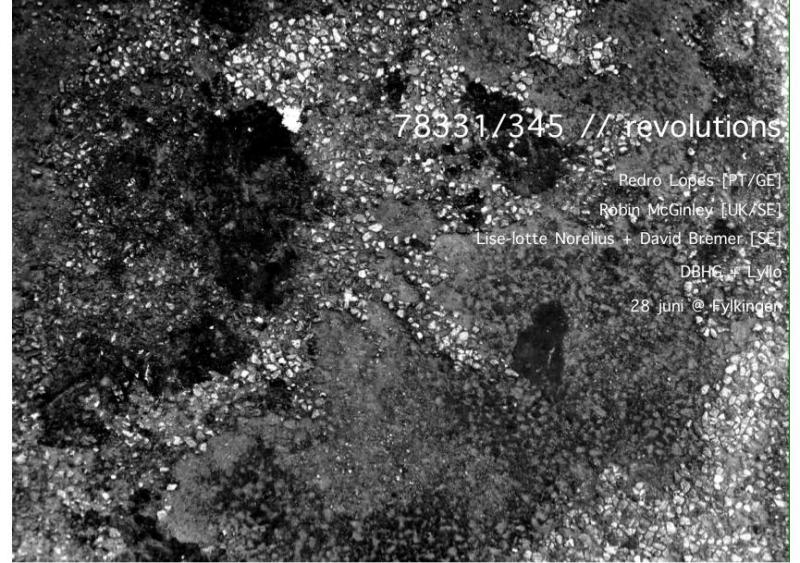 An evening smacked with performances and concerts and a celebration of the vinyl medium with a special visit from Berlin.

We'll have vegan food all ready for you - skip dinner.
Bring cash!

Pedro Lopes is a resident musician in Berlin, with a vast curriculum of collaborations with people such as Reinhold Friedl, Dj Sniff, Carlos Zíngaro, Gabriel Ferrandini, Pedro Sousa, and many others; furthermore, its a path enriched by radio art works displayed at Transmediale, Serralves Foundation, or Goethe Institut. Pedro makes of his instrument, the turntable, a vessel for a experimentation discourse, of analogue tone, often recurring to amplifiers, DIY pressed records, modified needles and percussive objects. Pedro Lopes is one the most interesting and innovative representatives of the exploratory music of Portugal. [text by Rescaldo Festival]

Pedro's words on his piece:
This piece is not about turntables, but it is about sounds. However, because designing & producing any sound is a reflex of the instrument itself, one ends up dissecting the turntables as musical objects. This piece is about subversion if you consider that the turntable is typically seen as a musical reproduction instrument rather than a musical production instrument. As the turntable matures, new voices are pressed on it, beyond scratching and conventional turntablism, these resonate sounds through feedback, self-built needles, percussive objects and self-pressed acetate records.

Lise-lotte Norelius is one of Stockholms most active electronic musicians.
Besides composing new music for other musicians and electronics, she performs both as solo artist and in collaboration with other musicians and artists from different fields. She is one of the founders of the DIY ensemble Syntjuntan who has got a lot of attention for their workshops and concerts with textile instruments.
www.lise-lottenorelius.se

DBHG, David Bremer och Henrik Grevesmühl, have incoproated trashed and prepared records in their music since 2002. Hits the area between
John Cage and Grandmaster Flash.

Lyllo, The all-art equilibrist, Johan Lindvall, among all other things hosted the project Fyloop, released on Fylkingen Records – an album using 360 lock grooves. Each loop composed by Fylkingen artists. Lyllo uses it as the source of sounds tonight.