At one of Fylkingen´s concerts at the Modern Museum in Stockholm in 1967, Åke Hodell presented a newly written piece entitled Strukturer III (Structures III). Avant-garde pieces of the time were supposed to have titles like that, following the example of the priesthood in Darmstadt (Pierre Boulez´ Structures).

I assume that the audience, reading the title in the programme, envisioned a calm electronic glass pearl display of serially trimmed sinus tones. When the piece started, a hellish noise came from the loudspeakers, strategically placed in a ring around the audience. Smattering rifle shots were replaced by chattering machine guns, projectiles from grenade launchers and mortars whistled over the heads of the audience and exploded in pillboxes on the other side of the room; the engine noise from bombers grew into an earsplitting roar; screaming bombs exploded amidst anti-aircraft fire; and finally, the cobalt bomb exploded, a doomsday murmur which vibrated in the speakers for several minutes.

Strukturer III turned out to be a sound collage which authentically and chronologically demonstrated the acoustic happenings of both world wars. Perhaps the most frightening part of the piece was that one never heard any human voices, neither commands nor the moans of the wounded. It was the death machines themselves which got to perform, the infernal concert presented by humanity when it tries to murder itself.

Strukturer III is a characteristic piece from Åke Hodell´s first avant-garde phase, the antimilitary; other include igevär, General Bussig, and Law & Order Inc. Åke Hodell´s art always has a message, in these early works an almost agitating frenzy, which breaks out of the limited eclecticism of the contemporary avant-garde. The message is not radically pacifistic. Åke Hodell knows that absolute evil can only be defeated by absolute force. During the summer of 1940, he was one of the few newly educated young fighter pilots who flew practice missions over Skåne while waiting for a possible German invasion. In July 1941, Åke Hodell´s airplane crashed from a height of 100 meters; he was badly hurt, and was forced to spend the following years at the hospital in Lund. 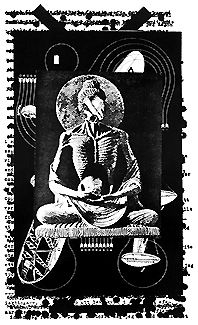 This experience is the basis for Självbiografi (Autobiography, 1967); the novel Skratta Pajazzo (Laugh, Clown, 1983); and, more indirectly, as an overwhelming feeling in his works of the proximity of death. Djurgårdsfärjan över Styx (The Djurgården Ferry across the Styx) is a vision of how the little Stockholm ferry, on its daily round from the city district of Slussen to the amusement park at Gröna Lund, transforms into Caron´s boat over the river of forgetfulness, interweaved with a mist of bells, foghorns and cawing crow choruses.
It doesn´t happen often in our art history that a group of young artists from the avant-garde by themselves invent a wholly new genre or form which is not built on outside borrowings, and Swedish modernism during the 20th century offers for the most part a varied map of eclectic loans from foreign models. However, during the 1960s it happened, and these new creations got the literally descriptive name "text-sound-composition". Öyvind Fahlström had shown the way with his wildly experimental radio piece Fåglar i Sverige (Birds in Sweden, 1963), and during the following years, the form was developed by Åke Hodell, Bengt Emil Johnson and Lars-Gunnar Bodin.

In a text-sound-composition, music, electronically treated sound material, lyrics and dramatic text are combined into an individual hybrid form, which it turns out offer surprising possibilities for development. Åke Hodell´s production from the years around 1970, evolved from the first antimilitary phase, showed a wholly new synthesis which matured to mastery in pieces such as 220 Volt Buddha (1971), The Road to Nepal (1971), The Djurgården Ferry across the Styx (1972), Cerberus the Hellhound (1972) and the radio opera Spirit of Ecstasy (1977). The repetitive element in Åke Hodell´s work (occurring long before minimalism had reached our shores) seems rhythmic, supplying a musical form. In Law & Order Inc the droning monotony exposes the inhuman element inherent in total discipline; in The Djurgården Ferry across the Styx the repeated refrain (death´s crows, Caron´s crows) makes time stand still. Åke Hodell achieves a deep, intensive effect, especially present in a piece like The Road to Nepal where jungle sounds, birds and chattering apes, and the roar of a motorcycle form a meditative mantra: "a sort of cleansing, transformation, or unfettering", in Åke Hodell´s words. "Landscape Music" which is also very visual. Electronic purgatory. 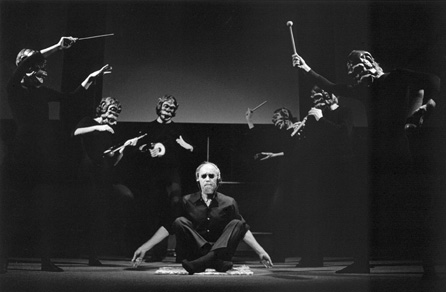 The subway car where Orpheus meets his Eurydice never gets farther than to the Fridhemsplan underground station in central Stockholm. A serene Mozart chord is torn to bits by howling wolves in Orfiska uppenbarelser (Orpheic Revelations), text and sound united in an inner vision, one is reminded of Gunnar Ekeföf´s words in the foreword to Hodell´s debut book Flyende Pilot (Fleeing Pilot) from 1953, about the miraculously surviving and reawakened poet who "has started searching within for a Gondwanaland". Among the clichés from the 1960s is the stubborn myth that "political" art came about first around the end of the decade, in the shadow of the Vietnam war. Åke Hodell´s art had a political edge from the beginning; in Lågsniff he attacks the Franco dictatorship in Spain. Öyvind Fahlström used the cold war in his art; the balance of terror, the worldwide imperialism of the superpowers. Åke Hodell used the balance of terror in his apocalyptic USS Pacific Ocean and the black civil rights movement in America in Where is Eldridge Cleaver?. With the radio piece Mr Smith in Rhodesia (1970), he started a political turmoil of which he gives an account on this CD. "A moral content can be found in a form." ‚ This discovery has led Åke Hodell through decades of new creation, an endless search for unknown, untouched terrain.
He followed his own path without compromises, a unique path in times where trend-bucking and commercialism are the obligatory traps. Åke Hodell has displayed his varied palette with an ever widening scope of expression, from outgoing agitation to inner searching, burlesque humour, and dark melancholy. In short: Cabaret Hodell, a one-man show on his own stage, totally unique within the Swedish avant-garde during the past half century.