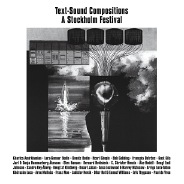 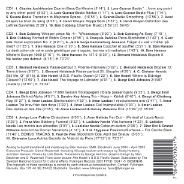 Fylkingen Records in collaboration with the Swedish Radio released a series of LP records with text-sound compositions between the years of 1968-77. All of these were documentations of the international festival Text-Sound Compositions A Stockholm Festival, which Fylkingen presented in Stockholm several times during these years. Most of the LPs were only pressed in batches of about 400-500 records, and most of the LPs sold out during the festivals. A re-release had long been planned, and this 5 CD box marks the complete re-release of the complete recordings. Apart from the 5 CDs with in all ca 6 hours of material, the CD box contains a 60 page booklet with essays by Teddy Hultberg and Sten Hanson, as well as historical photographs taken by Lütfi Özkök during the festivals.

The term text-sound composition was coined in 1967 in Sweden by the composers/writers Lars-Gunnar Bodin and Bengt Emil Johnsson, and was meant to serve to name a genre that was a vital art form in the no man's land between sound, poetry, and music. Text-sound compositions had influences from previous modernistic waves such as futurism, dadaism, lettrism, etc., but perhaps the most important influence was the Swedish poet and visual artist Öyvind Fahlström, who had just over a decade earlier coined the term "concrete poetry". The term concrete poetry related to Pierre Schaeffer's concrete music, and it is somewhere between concrete poetry and concrete music that text-sound compositions appear. The birth of the electronic music studio and concrete music's idea that every sound can be freed from its original context and given a new meaning when it is reworked and put together with other sounds in the electronic music studio became the catharsis for text-sound composition. In the electronic music studio, voice and language sounds can be broken down, unleashed, and then fused together to become a poetry that had never been heard before. Certain text-sound composers would come to work only with pure lingual sounds, but most eventually came to integrate lingual sounds with other sounds, both concrete and electronic.