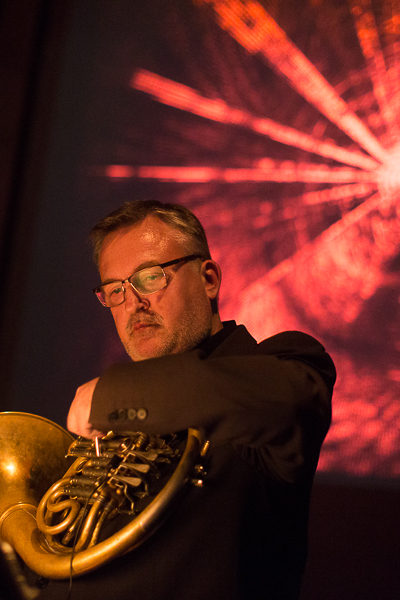 F L U I D D Y N A M I X (Sören Hermansson & Fredrik Olofsson)
invite you for an evening with new music for solo performer and electronics.

The concert starts with a portrait of composer Joakim Sandgren with guests Karin Hellqvist (violin) and Boa Pettersson (bass clarinet).

After intermission follows an hour with four pieces for horn and tape. Interleaved between the pieces are short videos recorded by Sören. They show various places and situations and are cut, manipulated and arranged by Fredrik.

Duo FLUID DYNAMIX was founded in November 2017. They met in 2013 when Sören was looking for new repertoire for horn and electronics and got recommended to ask Fredrik for a piece. This resulted in the audiovisual composition redeem that was premiered the year after.
FLUID DYNAMIX video/horn duo was established to share our passion for new music and to challenge the traditional concert form. Our one hour program consist of compositions for horn and electronics written for Sören intervened with short videos that glues the different pieces together.
Essential for our creativity as a duo is to frequently meet and get influenced and inspired by the new music scene in Berlin.

Violinist Karin Hellqvist is performing internationally as an interpreter of contemporary music. With profound engagement in the music of today she is a sought after soloist as well as a dedicated chamber musician. With ensembles as Cikada, Oslo Sinfonietta, Duo Hellqvist/Amaral, neoN, and Faint Noise she dedicates her time to commissioning and performing new works as well as championing the established contemporary repertoire. In her solo project she recently commissioned a body of solo works exploring the violin in the company of electronics and various sound objects; paired with flower pots, guitar pedals, street noise, chain saws and bird song.

Boa Pettersson studied at The Royal College of Music in Stockholm between 1970-1975 and later 2008-2010 at EMS the center for Swedish electro acoustic music in Stockholm.
Since the end of the seventies he has been a part of the contemporary and experimental music scen in Sweden besides his work in Norrköping Symphony Orchestra.
1987 he was one of the founders of Ensemble Ma a group that give concerts where pieces written for the ensemble meets classics from the 20th century.
Pettersson has a special love for the big clarinets, the bass and the Contrabassclarinet and have premiered pieces as soloist with orchestra and ensemble and solo pieces, but perform also the Bassclarinet and Contrabassclarinet standard repertoire like Xenakis Échange, Donatoni, Scelsi, Grisey etc.
Since 2007 he is also working with the bassclarinetplayer Christer Bothen in different projects.

Sandgren has composed computer-assisted since 1997. Since 2003, his music has been entirely oriented toward working on secondary sounds of instruments. These sounds are often of a very low intensity and often have to be enlarged using microphones. The way the compositions are designed is reminiscent of an "instrumental granular synthesis". Even if instrumental, Sandgren's compositions are conceived and composed in the way that we compose electroacoustic music. Since 2007 he has been working on a series of mixed pieces (for musicians and computer).

Sören Hermansson is currently doing his 45th season as professional hornplayer. His CV includes orchestralpositions, teachingpositions (a.o. former Hornprofessor at School of Music, Ann Arbor, Michigan), and performances around the world. He has commissioned and premiered around 60 works, and recorded many of them on labels like BIS, PHONO SUECIA, CAPRICE and FINLANDIA.
Sören is currently working on enlarging the repertoire for Horn and Electronics, and is a member of KammarensembleN and performs frequently with NEO.

Fredrik Olofsson studied composition at the Royal College of Music in Stockholm and at the School of Music in Piteå. Ever since his graduation in 2000 he has worked as a freelance soft- and hardware developer, performer, composer, video artist and teacher. He is a long time user, advocate and contributor of the open source audio synthesis software SuperCollider.
2009-2018 Computational Art, Universität der Künste, Berlin, 2011-2016 Rhyme research project, The Oslo School of Architecture and Design, 2008 Artist-in-Residence, IAMAS Japan.