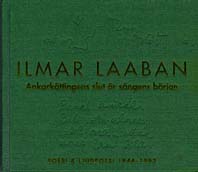 Ilmar Laaban´s poetry, practically a class in itself in Sweden, traverses linguistic borderlands where words can get split and torn apart, reduced to something beyond words, perhaps more universal than words, but where the various components can just as often be reassembled in new words.

The cycle of destruction and construction always fascinated Laaban the word-wright and word-kneader, going through it over and over again to find the cracks and clefts from which an unexpected spring might well forth.

Like Tristan Tzara he holds to the maxim "thought is born in the mouth". Laaban´s poetry, which gives sound and form to the subconscious, is a poetry of utterance, and therefore speaks for itself. But the appended compilation of statements on the subject, from the writer himself, nevertheless offer a rewarding insight into his poetic method and reveal much about the associative pathways down which his imagination has wandered. This CD begins with two examples of Labaan´s surrealist recitation from the 40´s and 50´s, followed by some of his polyphonic text-sound poetry (which he started in 1967), and finally some sound poems from the 90´s.

Ilmar Laaban was born in Tallinn, Estonia in 1921. He studied romanic languages at the university of Tartu and musical composition at the Tallinn conservatory. To avoid being drafted into Hitler´s army he fled to Sweden in 1943. He had already been writing surrealist poetry in Estonia, and continued in the same vein in Sweden, supporting himself as a freelance culture and art reviewer. His grasp and overview of the international art arena gave him an important role as a guide and source of inspiration for many artists who came in contact with him, not the least those in the circle around Fylkingen.

Published in collaboration with KALEJDOSKOP which has previously released the following books: